Rethink Outside: Getting Kids Outdoors as Early as Possible

Getting Kids Outdoors as Early as Possible

Kim Shaw owns and runs two early childcare centers in the community where she grew up in Raleigh, North Carolina. “At a young age, I knew it was my calling,” she says. But in high school, Shaw realized that working in a center would mean making minimum wage, so she picked a different career. After 20 years of raising her family and working outside of the home, she wasn’t satisfied with the care her children were receiving and wanted to provide that service herself. So, she began to convert part of her home into a childcare center: A Safe Place. “I wanted to serve my children and let them know they are valued, and they deserve everything any other child would get,” Shaw says.

“To improve the quality of care, we stumbled across grants,” she says. After applying and receiving the money, this support helped her make positive nutritional changes to the food she was serving the children, as she vowed not to open any more cans and to only buy produce at the farmer’s market.

After becoming one of the first five star accredited family childcare homes in North Carolina, both Safe Place Centers were later rated five-stars to serve Southeast Raleigh. A Safe Place was then chosen to be a demonstration site for Preventing Obesity by Design (POD).

Over time, Shaw’s husband Maurice helped build most of the outdoor structures, and their blended family including her children Abram, Tyler, and Kaleb, and his, Brittney, Breyah and Brian, all benefited alongside their community.

Understanding What Every Human Needs

POD provides landscape design seed money and teaches childcare center owners how to create learning environments that pull teachers and students outdoors. The effort also engages the people who license and inspect the centers. This way, rules and regulations don’t stand in the way of creating these crucial spaces and opportunities.

Robin Moore and Nilda Cosco, founders of the Natural Learning Initiative (NLI), launched POD in 2007. Part of the College of Design at NC State University in Raleigh, NLI uses research and professional development to further healthy human development and a healthy biosphere. Like all NLI’s work, POD is supported by a large body of research stressing the importance of connecting kids with nature as early as possible; being physically active outdoors; enjoying unstructured play; and eating fresh, healthy, unprocessed foods.

“We want to start working with children at year zero,” says Moore. “We want them to have positive affiliations with the natural world and carry that with them in their daily life.”

“The needs of young children are more on the radar, but they still are not well attended to,” says Cosco. “We both have a background in human rights, which is an important part of this work.”

This story features four of NLI’s longtime partners and childcare center outdoor learning environments designed to nurture healthy, holistic child development from year zero onwards. The story is one of an inspiring series curated by Rethink Outside. 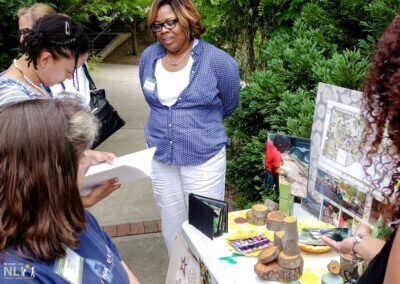 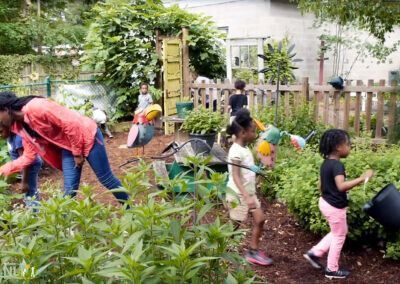 Kids working and learning in the garden at A Safe Place. Photo credit: NLI. 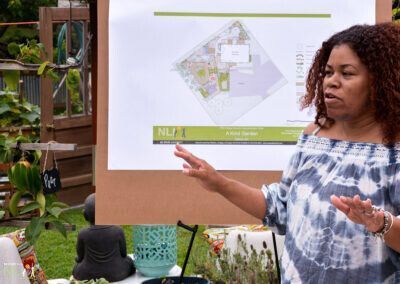 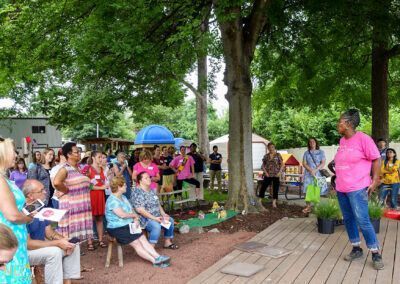 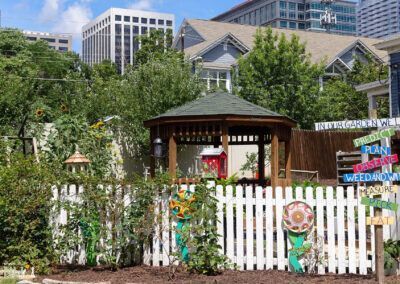 View across the “microfarm” at Beginning and Beyond, to the high-rise buildings in downtown Raleigh. Photo credit: NLI. 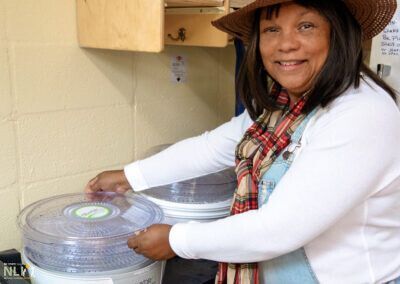 “People ought to have access to quality childcare and environments wherever they are,” says Alberta “Alle” Forney. She sees her childcare center in a residence in Raleigh as a smaller version of Shaw’s center. When Kim Shaw invited Forney along to seminars and conferences, she went. Soon she was implementing what she learned at her center.

Eventually, Forney signed up for the NLI Early Childhood Outdoor Learning Environment Certificate Program. Her current space, A Kind Garden Preschool, became her capstone project featuring a rabbit hutch, chicken coop, gardens and intimate shady pathways and places for play and learning. “The whole team at NLI was nothing but supportive,” she says. She also found success by bartering with others for services as she built new structures and enhanced the outdoor classroom.

While the high-quality childcare she provides to the neighborhood is critical to Forney’s mission, she also understands the power of inspiring others to dream big. “I have a lot of people, when they come and see that this is a center that only has 12 children during the day and see the success that I have, they think maybe they can do this too,” she says.

For Rosalind Blair, an act of God connected her with POD and the work of NLI. In 2011, she was hosting a Flapjack fundraiser for her Beginning and Beyond playground at the Applebee’s that morning and that afternoon a tornado devastated her playground. After that, she searched out grants and discovered the work of NLI at NC State. Rosalind received seed funds from the program and maximized it with donations from the community. Now she has an award-winning center. Children harvest and take home produce that they grow. “Our outdoor learning environment is in the heart of downtown. We call it our hidden oasis. What we have now is what we always needed,” says Blair.

“We were already headed that way, but NLI enlightened us and showed us through training what it could be for our children,” she says. Still, she’s not done and looks forward to further enhancements for her families in the years to come.

Wanda Davis, recently retired from her position as director, looks forward to seeing where her center will go. She also remembers how far they’ve come. Childcare Network #61 now has 322 square feet of vegetable gardens, 277 square feet of fruiting shrubs and five fruit trees, but it started with a path. “The playground was a steep hill, and their approach was to have pathways—it was a storytelling pathway, and the kids would want to take that adventure,” says Davis.

Students have been included in the center’s decision-making process since the beginning. “We give suggestions at circle time and watch what the kids gravitate toward. You have to ignite their imagination,” she says. “We purchased a time-lapse camera so the kids could see the growth of plants, and to use during our embryonic project. Then, before a thunderstorm, I asked the teacher to point it to the sky, and it captured a storm and lightning. We use every outdoor opportunity to teach the children and open the teacher’s mind to a whole new way of learning–a way of life.”

Says Davis, “A lot of schools offer foreign language, we were trying to teach a lifestyle skill at a very early age. Parents could grow items in a flowerpot to make dinner complete.”

Each of these centers build on existing efforts and continue to do more. At one point, Blair took a trip to Italy with Moore and Cosco to see other examples. “Looking at playgrounds and what they were offering, I knew we had a gem right here in Raleigh,” she says. “We are making a difference, and we are cutting edge.”

Their efforts also laid the groundwork for outstanding support during the challenges with COVID-19. Even at lower capacity, each center offers a safe and engaging outdoor environment and support for families with the fresh food they grow.

“The children love it here, it’s their park,” says Blair.

Shaw’s son Abram, now grown, can speak to the impact of this work. He recently told his mother, “I can name five people in our community that did the most for our zip code, and you’re one of them.”

“We all believe in it and make it happen,” says Forney. “Through one person lighting a fire, all of us have caught a fire.”

Want a closer look? Take a virtual tour of two of the centers featured above.
Getting Kids Outdoors as Early as Possible | Natural Learning Initiative