Although the epidemics and infectious diseases targeted by public health agencies during the last 130 years have largely been eradicated in the Western, industrial world, preventable lifestyle diseases have replaced them. Postmodern childhood is facing entirely new health threats resulting from rapid, massive cultural changes, including the impacts of new tech­nologies on behavior. More and more of children’s time is being “pulled” indoors away from nature by home­work, video and computer screens, parental anxiety about stranger danger, and the dangers of automobile traffic CT ago et al. 2005). Richard Louv’s book Last Child in the Woods has helped to focus public attention on the possible negative consequences for childhood health of these new risk factors. To protect children and support healthy lifestyles, new forms of “inoculation” are re­quired, including changes to the built environments of children’s daily lives.

Stimulated and emboldened by the many-layered, wide-ranging contents of Children and Nature (Kahn and Kellen 2002) and the empowering thrust of the biophilic building design symposium from which the present book derives, this chapter presents examples of designed environments that support or have the poten­tial to support children’s daily outdoor contact with na­ture and thus ensure the biophilic evolution of our planet and its human citizens. This chapter draws on the latest research findings, which suggest that a healthy, therapeutic effect is experienced by children who are directly exposed to nature (Wells and Evans 2003; Wells 2000; Kuo et al. 1998) and explores the role of physical design in improving the quantity and qual­ity of exposure to nature by integrating it into the built environment. The majority of children worldwide live in urban environments, approximately half of them in urban centers of less than 500,000 population (Satterthwaite 2006), Thus our focus is the everyday life of urban children and concern for the quality of the envi­ronments where they spend most of their time, where “biophilic design” (supporting and stimulating children’s biophilia) has most potency, where access to nature can be guided by design policy in childcare centers, schools, residential neighborhoods, and community facilities such as parks, museums, zoos, and botanical gardens. These topics will be addressed within the scope of this chapter because the fact is that they are not receiving ad­equate attention in current urban design practice. 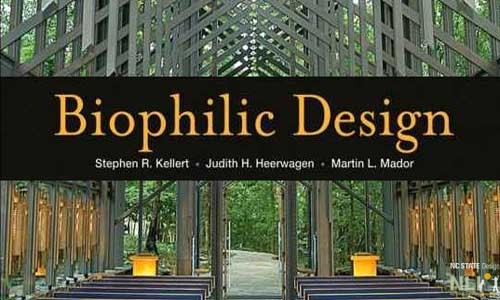